This girl can! How Eileen swam her way to success at Bramley Baths 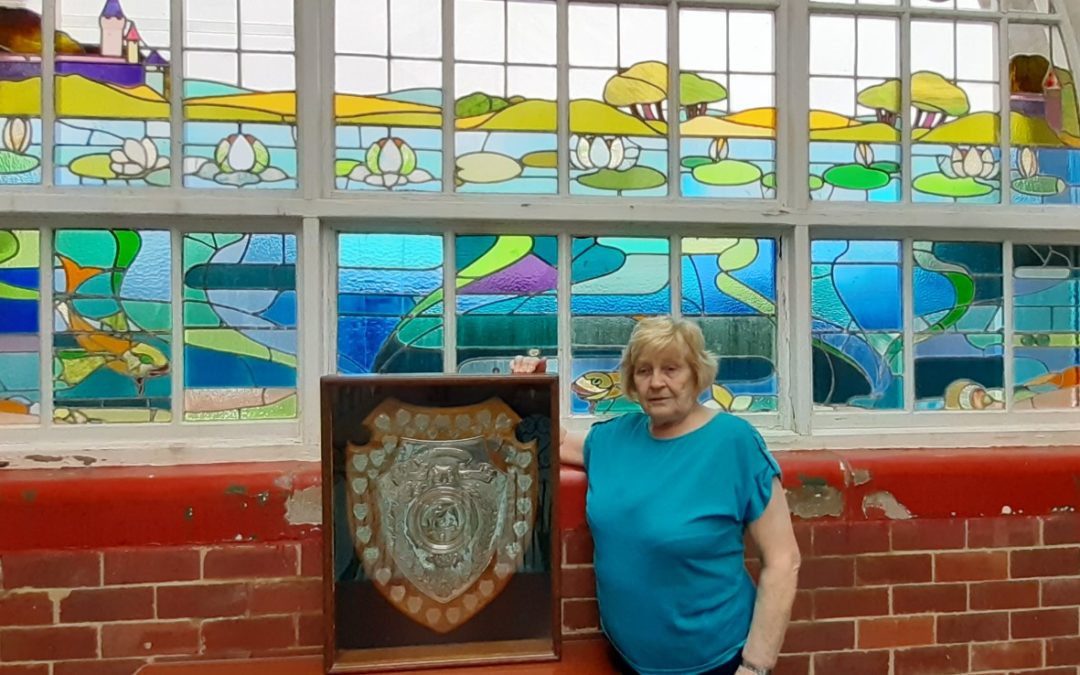 It’s International Women’s Day on Sunday, 8 March – and here at Bramley Baths we’re proud of the achievements of some of our female swimmers over the years.

Eileen Chase was born 14th July 1940 at Nansen Place (Bramley), and began swimming competitively at Bramley Baths at the age of six.  She was picked out by Mr Pearce, the centre manager and swim coach, from her school lessons with ‘Stanningley C.P’.

“I more or less [spent] the biggest time of my childhood up here…” she said.

Eileen remembers her days training at the Baths fondly:

“Mr Pearce actually taught us the training. We used to go train at Bramley Baths before school and we used to go after the Baths closed, for training again… A lovely man [Mr Pearce], he had such a presence!

“He never wore the whistle around his neck, but always had it in his hand, and boy did he blow that whistle! He’d teach you with a rope tied around your waist, and then just pull you to the side if you were struggling.

“No armbands in those days! I used to do the backstroke, the crawl, and then Mr Pearce in his wisdom decided that I was strong enough to do the butterfly, oh God…

“Then tumble-turns, they took some getting into your head!  You’d be doing a backstroke turn and go off sideways and he used to shout no no no no no!

“From there I went on to swim for Yorkshire and then from there I was spotted and I tried out for England… I wasn’t right keen on the English training.  Basically, it was very very hard!

“It was Mr Pierce actually that pushed and pushed…[He] could always tell if you’d make it as a swimmer, and he’d know if you couldn’t make it even if you thought you could.

“I think he was a bit disappointed in me when I said no…not going into the English. It was too much, far too much travelling and with schoolwork you just couldn’t do it. Not unless you had a lot of money at that time, you know…”

Remembering the butterflies before a race, Eileen says:

Eileen is most proud of her time racing at the Baths in the school galas:

“A lot of galas were there. I met a lot of celebrities at that time, rugby players presenting you with your cups or whatever you’d won, and it was good when you look back it was good… but you didn’t appreciate it”

“The girls that I used to go to school with, we formed a swimming team, and we used to have galas at Bramley Baths for all the schools in Leeds. Broad Lane for the last six or seven years had won the massive big shield that was in a wooden cabinet, and there was nobody in the Leeds sides that could touch them. But then we formed our swimming team and the first year we entered we won the Bramley gala and it were just great!”

The girls won the ‘Mrs Arthur Smith’s Challenge Shield for Girls’ in 1952 and then again in 1953.  The first girls team to be awarded the shield by the ‘Bramley and District Swimming Club’ were from ‘Bramley National School’ in 1910, and the last were from ‘Sanford C.S’ in 1961.

Eileen is now 79 years old but her passion for swimming is just as strong!  She still swims regularly, clocking in 80+ lengths “on a good day”.

Eileen recently popped in to see the Challenge Shield and photos in our collection.  The happy memories came flooding back as she saw her friends who she raced and trained with nearly 70 years ago.

This Bramley girl truly is a legend of the Baths, and proof that age is just a number.